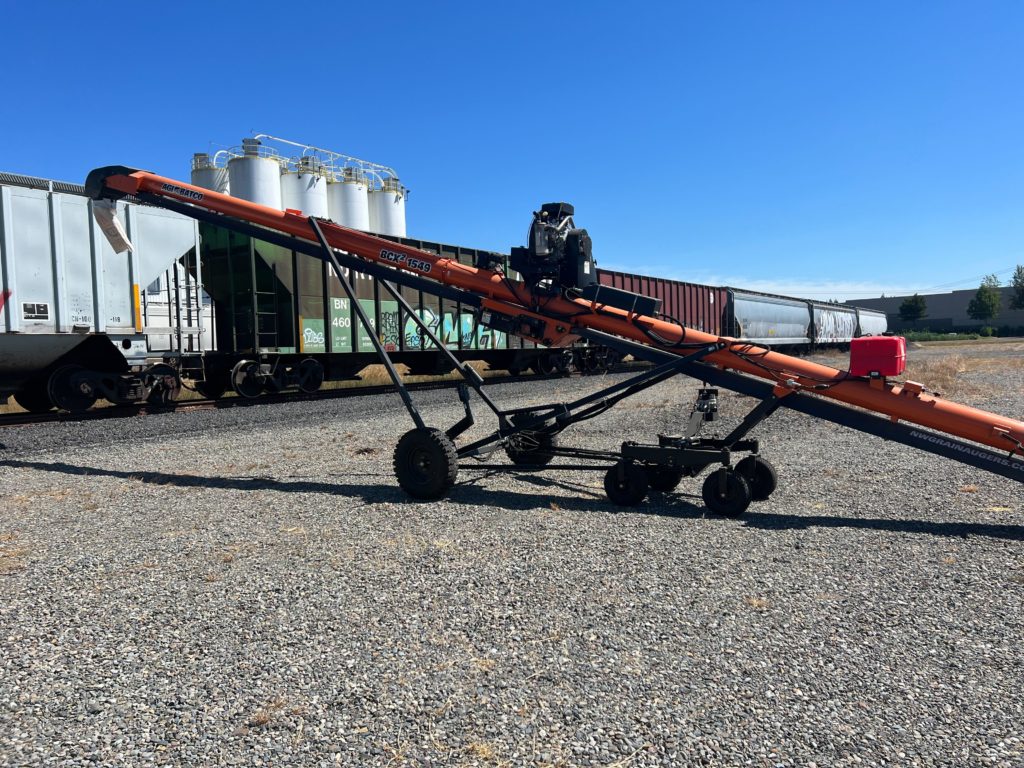 Ready to load grain in the Chehalis Industrial Park for the 2022 season. 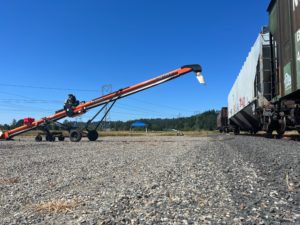 The grain conveyor belt moves grain from a truck to a hopper car to be shipped out to regional and international markets via rail.

Lewis County has a long-time heritage of farming and agriculture, with some farmers being the third or fourth generation to grow in Lewis County. For many years, these local farmers and growers have dealt with flooding and natural disasters, loss of processing facilities, and a lack of infrastructure to support agribusiness.

In response to these issues, regional producers formed the Southwest Washington Growers Cooperative to support agricultural development in Southwest Washington. Today, the Cooperative has 31 active members seeking to increase the viability of family farms through collaborative opportunities. These producers worked closely with Northwest Agriculture Business Center (NABC) and WSU Extension and found that grain, especially malting barley, could serve as a viable crop replacement for both growers and buyers. However, infrastructure was still needed to provide storage and facilitate transporting crops to regional buyers, most of whom require rail transport.

In 2019, the Port of Chehalis and the Cooperative successfully petitioned the Lewis County Commissioners and were awarded $800,000 for the installment of a rail spur on the Port’s property. The rail spur was completed in the spring of 2020 and allowed growers to transload malting barley to Great Western Malting in Vancouver, Washington, that summer. The first year saw 600 metric tons of barley delivered, followed by 1,400 metric tons in 2021. It’s projected that 2,500 metric tons will be delivered in 2022, produced on approximately 1,000 acres. 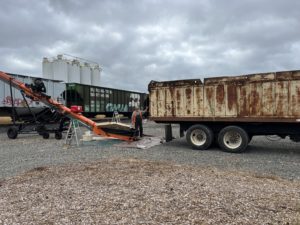 The next phase of the Southwest Washington Grain Project began shortly after the completion of the rail spur, with the goal of creating an aggregate storage and rail transload facility alongside the rail spur.

In support of this goal, the Port of Chehalis was awarded $1.75 million through the Washington State capital budget in 2020. This funding will allow for the construction of a publicly accessible rail transload facility consisting of upright grain bins and conveyors for loading and unloading grain. The Port of Chehalis is actively pursuing additional funding for the design and construction cost associated with the installation of roads and utilities to serve the facility. If the necessary remaining funding is secured, construction could begin sometime in 2023.

Once completed, the storage and transload facility will allow the region’s grain producers to access regional, national, and international markets. The project anticipates generating over $750,000 in producer payments and handling fees in 2022 and injecting an estimated $18 million into the local economy over the next nine years.